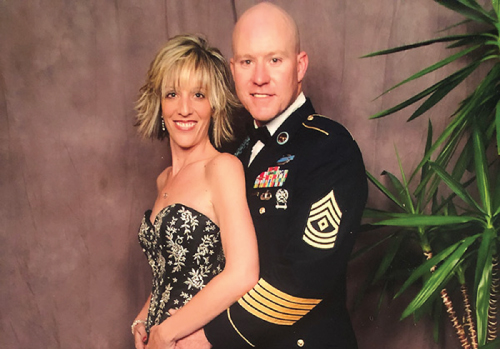 In July 1992 I met my husband SGM Robert J Bowman. I was 20 years old. Six months after we met, we were married in January 1993. Together we raised four beautiful daughters, moving every 2-3 years and living the life of an Army family. The morning of 9/11/01 we woke to a new “normal” Our new life was a life of war and deployments. Rob deployed to Mosul, Iraq in October 2004 he was gone one year. In 2007, in support of the surge, Rob deployed to Iraq again for 15 months, he was in and around Baghdad.

Rob was infantry, he was an Airborne Army Ranger, he was a “guys, guy” even when it came to his four daughters. He taught them how to shoot with a 22, he made sure they each knew how to bait their own hooks with a worm, so they could engage in another one of his favorite past times, fishing. We would take the girls camping every summer in his favorite place in Wyoming, where he instilled the same love he had for it in our four girls. He loved that they each enjoyed that part of his life, but you could also find his soft spot for his girls. He would brush their hair, and give his best effort to make “perfect pony tails” he would play with them on the floor while they had all their baby dolls out, and he always took the time to appreciate each of them in their interests. The men that Rob served with say “every time I heard Bowman’s voice come over the radio, I felt safe. He had a calming  nature to him that always assured me in times of heated battles, that it would be okay” Rob loved serving his country and leading his men more than anything, but he always managed to make me feel like I came first. He was a gentle spirit in manner, but in battle, a fierce fighter. He was a warrior right up until his very last breath. On January 13, 2013 our four daughters lost their HERO, this world lost a HERO, and a true patriot.

In the past 6 years since his death, I have learned so much about Toxic Exposure. Shortly after Rob’s diagnosis in 2011, as word got out to the men he served with in Iraq, we started receiving phone calls and messages about the rest of his platoon. Many of the men he served with were showing up with strange illnesses, they all talked about the burn pits, and the many other toxins they remembered being exposed to. We knew almost immediately after his diagnosis that his extremely rare cancer he had been diagnosed with, was due to the toxins he was exposed to while in Iraq. His Doctor had been seeing a trend in very young service members that were coming up with strange cancer for their ages. His Doctor ran the BRAC test to identify the gene that caused the cancer, and it was not present. It was a genetic mutation caused from environment. We took that knowledge and shared with as many service members that we could, in hopes of bringing awareness to it. I learned through my experience the daily struggles of being a caregiver to my husband, and our four daughters was one of the most challenging things I had ever been through. I realized how fortunate we were to have a Doctor that was smart on this topic, and able to understand immediately that this was toxic exposure.

I believe that we can do some things to help those that will walk the same path as me and my family have walked. If we educate our medical community on this “modern day agent orange” they can quickly identify the service members that have been exposed to burn pits and other toxins. This will ensure quicker diagnosis, and proper treatment to give them a better chance of survival. My husband lived about 10 months longer than the Doctors expected, and I am sure it was because his Doctor was educated on toxic exposure in our service members. The extra 10 months we had him, was precious and priceless, I am so thankful to have had that time, and for our girls to have had that time. I believe that in educating the medical community, this will also help caregivers from day one of diagnosis. I remember feeling very scared, lost and confused, I wish I had more guidance to help me navigate through the process. Not only do we need to educate our medical community, we need to educate the American people, we need to help people understand that our Military went to war when called, unfortunately, many are returning sick, we must take care of them when they return. My hope is that bringing awareness to this very critical issue will help us all better understand how we can help our Military men and women, who will continue to call on us for help.

At the time of his death, I was fortunate to be in touch almost immediately with TAPS. TAPS has been an amazing resource for me and my girls over the past 7 years. I have seen first hand the increase of Survivors coming to TAPS as a result of losing their loved one to an illness. The need for a program that focuses on “Illness loss” will be a tremendous benefit for our TAPS families. Losing a loved one from an illness is a very different kind of grief then losing your loved one that was KIA. I started grieving my husband at the time of his diagnosis, almost 19 months before his actual death. I grieved the life that we were never going to have, I grieved losing the “Army family” that had surrounded us for 20 years. Our daughters watched their big strong Dad, wither away to a skeleton of a man. The grief came in ebbs and flows for 19 months, until January 13, 2013 when he passed away, and my grief journey started again, in a very different way. There was guilt, relief and then resolution. I had to rebuild my life and find my new purpose. I have since become an advocate to help other Service members and Survivors that have had similar loss to myself.

“Our lives begin to end, the day we become silent about things that matter” - Martin Luther King
“Care for him who shall have borne the battle” - Abraham Lincoln 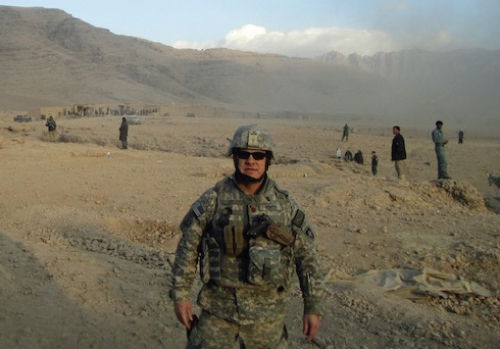 I am a US Navy veteran of Operation Enduring Freedom who was exposed to a variety of airborne toxins from burn pits and other sources while I was deployed to Afghanistan for one year between 2010 and 2011. Before I went downrange during that period, I had zero breathing problems and completely healthy lungs. In the first couple of weeks after I arrived in Kabul, where the air is particularly bad, my lungs had a severe reaction and became infected. It was controlled with medication over the next year. However, after re-deploying home, I stopped the medications and symptoms came back and I was diagnosed with asthma as a result of my deployment.

I was never in direct contact with the many reported burn pits in the area, but was impacted by their extensive pollution throughout the country, many dust storms with fine particulate matter, heavy levels of airborne fecal matter due to the lack of a modern sewer system in Kabul, many large diesel generators used to power all of our base operations, and the visits to Kandahar where 25-30,000 coalition troops worked in close proximity to the massive “poo pond” of raw sewage (Video here).

The air was so bad, many service members sought medical care for their exposures and were commonly told - even by some medical professionals -  “don’t worry, you get an automatic 15% VA disability rating just for being here.”  Of course, that wasn’t true, but the rumor in Afghanistan with varying percentages was widespread and still commonplace as recent as 2017 when a friend deployed there told me he heard it.

Service members many times are either returning home with, or later developing, illnesses as a result of their toxic exposures. Everyone serving in uniform today is serving voluntarily and accepts a certain level of risk while in uniform, but they deserve to be treated for their injuries when they return home.  I’m honored to be working with the Toxic Exposures in the American Military (TEAM) coalition on behalf of Iraq and Afghanistan Veterans of America (IAVA) to better care for those with health impacts from their service. 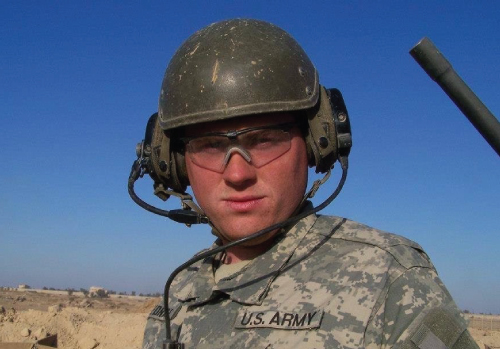 I served in the Tennessee Army National Guard, Indiana Army National Guard, & the United States Army. During my time in the military I served in many areas across the country and even the world like Kosovo, Hurricane Katrina, and Iraq. Being a Soldier was all that I knew in life. All this changed the day that I was injured during combat operations in Ramadi, Iraq. On April 06, 2007 the infantry team that I was serving with was hit with a Chlorine Vehicle Borne Improvised Explosive Device (CVBIED). This injury and exposure to the chlorine gas lives with me today.

I continue to seek medical care with the VA Medical center and have health issues that I will have to address the rest of my life. I was medically retired from the Army in 2010 due to my combat related injuries. This started a new chapter in life. Being a civilian and having to navigate my way through the VA Benefits and Health Care Systems. Although I am in a better place now those years of my life were challenging as there was no-one to walk me through the process of getting my disabilities service connected or getting appointments set up with the VA.  I now have routine appointments with the VA and have received service connection for the conditions related to my military service. I planned on retiring from the military but not under these conditions. I have also registered to the Burn Pit registry that has been recently established by the VA and the DOD.

My life was forever changed because of toxic exposure in Iraq.